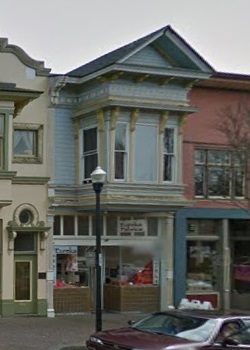 Built 1892. Originally erected by M.E. Cousins for the Harvey and McLaren saloon, this building received a new facade after a fire in 1905, at which time it was raised by a half-story. While the storefront appears altered, the upper level is intact. A large cantilevered, pedimented bay is dominant, along with various belt and frieze courses and other decoration consistent with the Eastlake style.