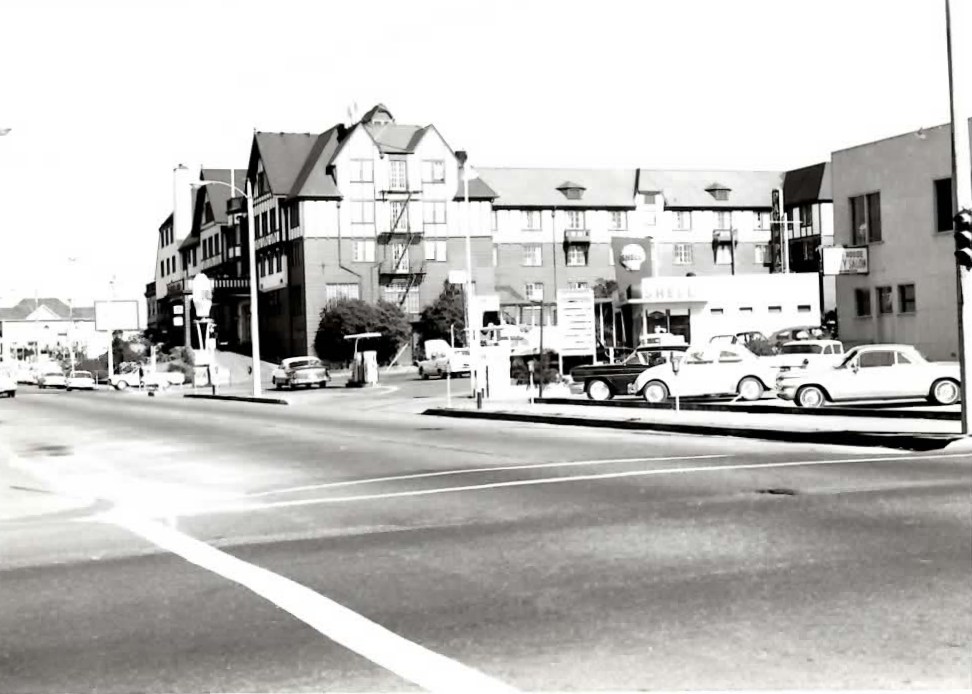 Built 1922. The Eureka Inn is a four-story, 104-room Elizabethan Tudor Revival architectural style hotel. In 1982 the structure was listed on the National Register of Historic Places in February 1982. For both architectural and cultural reasons, the hotel is one of the most important buildings on the North Coast of California.

In late September 2008 (after the inn had been closed more than four years), the Eureka Times-Standard reported that Libo Zhu purchased the Inn for $2.75 million. His business plan, reviewed by the Greater Eureka Chamber of Commerce, suggested that he has “ambitious” plans to honor the inn’s “integrity as a historic hotel.”

After being shuttered for nearly six years, the Inn reopened in May 2010. The soft grand opening included making approximately half the rooms available, with a promise from the new owner that “constant improvement will continue toward 5 star status full service,” including restaurants, bars, and conference rooms. The owner made good on his plans to return to the tradition of a themed Christmas program and tree in the great entry hall portion of the main floor. Hundreds of people attended the decorating ceremony for the themed event, “The Bounty of Humboldt,” on November 28, 2010. The Inn’s well known primary bar, The Palm Lounge, reopened in February 2011 as the Redwood Lounge. The reborn cafe will be re-themed as a full-service restaurant that showcases locally grown produce.

As of July 21, 2013, the Inn is now open and rooms are available to guests. All first-floor rooms have been remodeled. There are remodeled rooms on the second, third and fourth floors as well, but many of the rooms do not have new furniture packages like the remodeled rooms on the first floor. The Lounge has been completely remodeled and is open six days a week. The restaurant is now open for dinners only. The pool, spa and sauna are still closed to the public.

Architectural details contributing to the richness of this imposing Tudorbethan structure include the use of differing roof forms and “visually stunning textured elevations”, which are highlighted by stucco and half-timbering.

The 93,000-square-foot (8,600 m2) hotel, which fully occupies a city block, has had up to 104 guest rooms, including 99 rooms and five full suites. The hotel has historically contained up to three restaurants, two bars, two saunas, an indoor spa, and nine meeting venues, all of which has been supported by up to 140 employees. Resplendent with its courtyard (now primarily a swimming pool), grand entry, great lounge and giant fireplace, and constructed of Redwood, it is the largest conference facility and third largest lodging property in the region.

The hotel opening and dedication in 1922 coincided with the opening of the Redwood Highway between Eureka and San Francisco. A large property for those times, the Eureka Inn was the premier full service lodging between San Francisco and Portland, Oregon. Though it housed many thousands of visitors (including US Presidents and royalty) from all over the world during its first several decades, the hotel began to show the effects of time. In 1960 Helen Barnum, the matriarch of a successful timber family in the county, purchased controlling interest in the hotel and a process of modernization began.

After a significant management change in 1976 under the direction of Mrs. Barnum’s manager, John Porter, significant changes and upgrades commenced. Perhaps the best known change was that the hotel became known for daily cultural offerings against the backdrop of extensive decorations representing each year’s carefully chosen Holiday theme. Related events were typically centered on a large, extravagantly decorated Christmas tree in the old world style great lounge and main lobby. The front entry portico (usually graced by the presence of a black Cadillac stretch limousine) situated on elevated landscaping made this hotel the chosen spot for parade watchers and official review stands through the years. Countless meetings, conferences, receptions, performances, and various small and large family events have occurred within the walls of this venerable structure, a favorite of Humboldt County residents and visitors alike.